Amandine Verstappen got a sixth position during the second race of the Women World Championship in four days at Afyonkarahisar in Turkey. She is currently sixth in the standings, with two more races to go.

Amandine Verstappen once again impressed on the 9MM Energy Drink BUD Racing Kawasaki. Seventh in Qualification, she quickly secured sixth place in the opening moto, took over fifth after eleven minutes and, with solid lap times throughout the moto, was closing rapidly on the girl ahead through the final laps to finish just two seconds shy of fourth. In a repeat of her first start on Saturday the Belgian overshot the first turn in race two and was down in eleventh place at the end of lap one but she continued to push to reach eighth by half-distance, taking over seventh four laps from the end to secure sixth overall on the day and advance to the same ranking in the series points chase.

Now Amandine will race three back to back rounds of the French Championship, and will defend her leadership as she remains unbeaten.

Amandine Verstappen: “I’m pretty happy with my lap times and races but the results were not as good as on Saturday due to my starts. The lap times were really close during the timed practice period and I was in the same second as the fourth-best time with seventh. My first start was average but I came back to fifth, really close to van de Ven and Papenmeier. What can we say about my second start? The start is so important now that when you finish the opening lap in eleventh position you can’t fight for a podium. I found some good lines; most of the girls took the inside lines in the corners and I had to go outside to make some passes and come back to seventh. Now we have to return home quickly as next weekend we have the French Championship at St Jean d’Angely.” 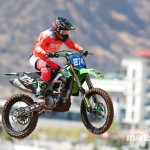 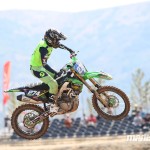 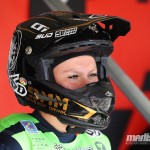