For the Monster Energy Bud Racing Kawasaki Team, the ‘Beach Race’ in Hossegor had a special taste as the 4th round of the French Beach Races series was organised just a few kilometres from the Bud shop. And by winning the Junior class for his last race this season, Brian Moreau offered a nice trophy to the team.

Never this season team Bud Racing met so many fans, as a lot of people came to visit the shop on Friday evening to share some nice time with the team staff and riders. Just a few hours after this party, Brian Moreau was behind the starting gate of the Junior race, for a 90 minutes race on the beach of Hossegor. After his crash at the Paris Supercross Brian was forced to rest during two weeks, and was just back training earlier this week. But it was enough to recover, as he took the lead of the race after three laps and just lost the leadership during a few laps when he stopped to refuel (3 times) and later when he crashed (3 times also!). Ten minutes before the end of the race he took for the last time the advantage and crossed the finish line nearly three minutes ahead of his closest rival! Racing for the first time in his career such a long race, Brian ended the season with a strong success and offers to the team his first win in it’s ‘home race’.

Brian Moreau: “When I came back on the bike this week I didn’t really know what to expect, but the feeling and the speed were OK so Stephane (Dassé) tell me that I could race in Hossegor. I know the beach as I walked there in summer time, but I didn’t know how the racing would be with the usual riders of this Beach series; finally it was a good race for me, event if I crashed three times and felt tired when the race was finished. It’s very nice to win here as there were many friends and partners, it’s nice also for the team and for sure it will be easier to go back training after a win!” 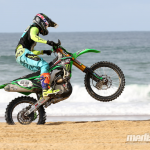 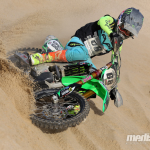 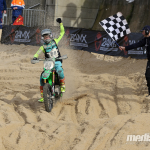 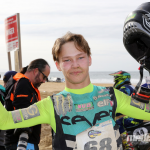 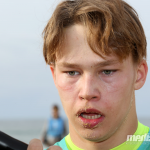 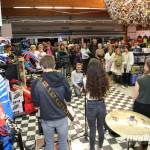 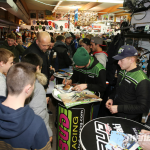