After many weeks of training and a couple of races in Spain earlier this year, the MX season finally start for team 9MM Energy Drink Bud Racing Kawasaki who won two rounds of the French Championship, in Ernée (Juniors class) and Plomion (Women series).

More than 300 riders were in Ernée for the first round of the French Elite, and the sun was there so racing conditions were perfect on such a nice track. The team was involved in the Junior and MX2 classes, and it’s in the Junior class that they celebrate wins as the Coenen brothers dominate both races. Winning both one race and scoring a second position in the other one, Sacha and Lucas were tight in the points but as he won the second moto it’s Lucas who got the red plate as leader of the series. Lucas had a tough opening moto, coming back from sixteenth to second but crossing the finish line more than 40 seconds behind Sacha who dominates the race. In the second heat Lucas had a great start and won ahead of Sacha, with the third rider forty seconds behind the winner

For Quentin Prugnières this race was the first one in the MX2 class against many GP riders, who come there to prepare the Russian GP. Eighth in his qualifying group, Quentin confirmed his ability on the 250 during the first race, with a eighth position. The second moto was different as he hit another rider who crashed in front of him; nearly last when he was back in the race, Quentin came back seventeenth. If we consider only the riders who do the French series, he ends his first Elite race fourth overall.
Quentin, Lucas et Sacha will be on June 26th in Great Britain for the opening round of the European Championships.

Amandine Verstappen was not in Ernée, but she was in Plomion for the first race of the Women championship. It was a perfect day for her, as she was the fastest in the timed practice period, got both holeshot and won both races! The holeshot was important to avoid stones, and with this double win Amandine will be the woman to beat once again next weekend in Huismes for the second round of the series. 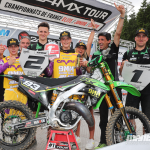 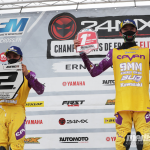 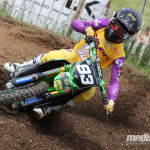 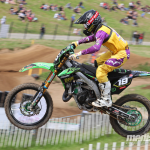 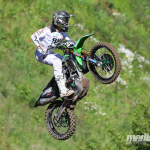