Team Bud Racing Kawasaki was on fire this weekend near his team base, as the Bud Racing Training Camp welcome the opening round of the French Elite in Magescq. The event was successful, and the team performed really well as Pierre Goupillon won the MX2 class while team mates Lorenzo Locurcio and Quentin Prugnières both stand also on the podium of their respective class.

It was the first time in the history of the Bud Training Camp that an official competition was organized, reaching the maximum of persons to attend the event, the organizer had to close the gate middle day Sunday as the event was sold out ! On one of his favourite training facility Pierre Goupillon stormed to an overwhelming two-moto victory in the opening round of the Elite MX2 championship, while new team mate Lorenzo Locurcio finished third overall.

The twenty-one-year-old Frenchman Goupillon, who will head the Kawasaki challenge in the European EMX250 series which swings into action in Latvia next weekend, dominated both motos from start to finish and confirmed that he’s ready for the sandy rounds of the European championship. Coming straight from his native Venezuela a few days earlier Lorenzo Locurcio has signed with the team to replace Mitch Harrison, and he displayed strong potential in both races with a fifth and a third position; on the podium of his first race in Europe, he couldn’t have wished for a better start with the team.

In the Junior class Quentin Prugnières posted the fastest lap time in his qualifying group, and did a solid first moto; runner up during the first part of the race he increase the rhythm to overtake the leader with four laps to go. Winner of the first moto Quentin unfortunately crashed in the opening lap of the second moto; outside the top twenty, he came back fifth to finish second overall.

Pierre Goupillon: “I spent many, many hours training on this track this winter and that helped me to improve my riding skills in the sand. We worked hard with our trainer Thierry Van Den Bosch this winter and I’m confident for this season. We saw today that I’m now a sand rider, even if there’s always some pressure for the first race; I had a good feeling all day and I feel ready for Latvia.”

Lorenzo Locurcio: “It’s been a very positive weekend; it’s been a steep learning curve but I have been working hard with Thierry (Van Den Bosch), the bike is good and I’m really excited! It has always been in my mind to come to Europe one day, so when Stephane (Dasse) called me I jumped on a plane. Since I arrived in Europe I have only practised on sandy tracks; it’s never easy to do your first race with the team on this kind of track so I’m very happy with this podium result.” 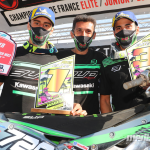 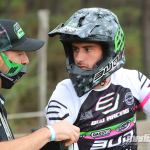 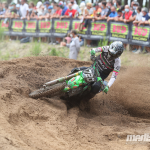 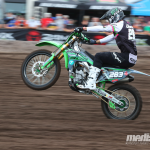 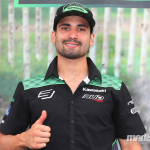 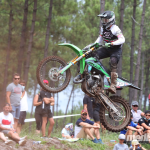 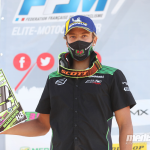