The French Elite Championship was back in action this weekend at Rauville la Place, where Sacha and Lucas Coenen were racing the 125cc junior class, once more the fastest riders as they finish first and second for team 9MM Energy Drink BUD Racing Kawasaki.

Coming to Normandy leading the series after their performance at Ernée, Lucas and Sacha Coenen dominate once more their rivals; they won all the motos so far, and share the wins again!
Fastest rider in his qualifying group, Sacha didn’t got the holeshot in the first moto but after a few corners he was leading and no one was able to put some pressure on him. He was the fastest on track and won the race twenty-two seconds ahead of his closest rival! Again leader of the second moto, Sacha made a mistake just before a jump and offers the leadership to Lucas, who had a tough opening moto as he had to come back from a bad start in third position. With this second win this season Lucas finish second overall, losing the red plate for two points; Sacha will have the red plate next weekend at Castelnau de Levis for round #3 of the series.

Haakon Fredriksen and Quentin Prugnières didn’t had such a good weekend as their young teammates, in the Dutch sands at Oss for the second round of the EMX250 championship. Qualified in third (Haakon) and seventh (Quentin) position of their group, both riders were unfortunate at the start of the first race as they were involved in a collective crash. Losing so much time to restart they came back twelfth (Haakon) and twenty-one (Quentin), expecting a better result in race two. It was a short one for Quentin who was forced to retire after one lap; outside the top ten at the start Haakon came back strongly in fith position and was chasing some rivals when he crashed pretty hard in the waves section. No injury, but enough pain to retire as the bike hit him on the ground.

Sacha: “I had a good weekend in Rauville, since the first practice session I had a good feeling with the bike and the track, which was well prepared. I was the fastest rider in my qualifying group, then at the first start I wheelie and was only third in the first corner, but then took the lead in the third one. I had fun during the entire race, with a good rhythm. In the second heat I had a better start in second position, came first in the second corner and made a little gap with my brother; then I did a few mistakes and crashed, and managed to do my best among the lappers. One win and one second position, it was a good weekend.”

Lucas: “As I couldn’t train as usual due to my wrist injury contracted in UK, I rode tight in the practice sessions and couldn’t find a clear lap to do better than fifth of my group in the timed practice period. My first start was average, mid pack, and I struggle with pain in my arms so I could come back only third behind Cazal. My second start was much better as I was second after a few corners; I had a good feeling, stay a few seconds behind Sacha, and when he crashes I got the lead and won the race. It was a good day for us and for the team.” 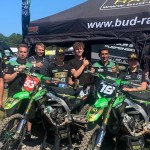 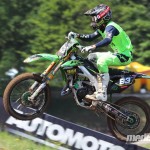 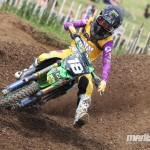 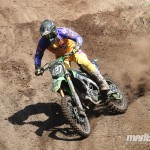 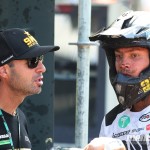 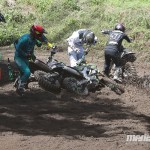