Between two rounds of the 250 European Championship, Team 9MM Energy Drink BUD Racing Kawasaki moves to Gueugnon to enter the second round of the French Elite championship. On the virtual podium of the MX2 class, Quentin Prugnières was penalized after a moto and finish at the bottom of this podium.

Gueugnon 2022 will remain in many memories for several reasons. The first one is of course linked to the weather, as incessant rain on Sunday afternoon destroyed the track and forced the riders to race in tough conditions. Recovering perfectly from thirteenth to fourth in the opening race, and then doing another strong come back from eighth to fourth, Quentin was the third man on track behind two GP riders, Tom Vialle and Stephen Rubini. This was on the track, but out of the track Quentin was penalised as his bike was over the noise limit after the race; despite the fact that it was raining – and everyone knows that rain affect the level of the sound – the technical staff gave him a penalty of five positions. Stephane Dasse’s arguments will be rejected by the jury, without even discussing about the process and the methods used to perform these measurements.

Still recovering from his injury due to the crash at the second start at Mantova one week ago, Eddie Wade was not in Gueugnon as the main goal is to see him fit at the next round of the European Championship in Portugal on April 2-3.

Quentin Prugnières: “Some positive points this weekend, but we also see some points that I will have to improve! In both races I did a strong comeback, even if at the start of the second race we touched each others with Tom Vialle. I made some good moves, then it took me some time to find my rhythm but I came back third which is positive. We will work on my start, to do even better in the next races.” 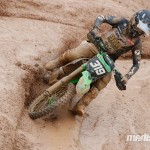 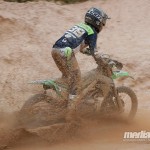 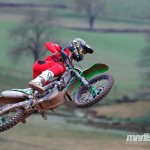