The Women World Championship and the European 250 were this weekend at the racing program of team 9MM Energy Drink Bud Racing Kawasaki, who was back to Agueda in Portugal. Despite a big crash during a practice session, Amandine Verstappen brings back home the best result for the team with a top five position.

The red sand of this nice track doesn’t really offers to the team the results they could expect, four weeks after the opening round of both series. As the last GP organised on this track was in 2019, neither Quentin Prugnières or Eddie Wade knew this location and they both improve their results in each session to get the sixth (Eddie) and eleventh (Quentin) gate pick for the races. Back racing a few weeks after being injured at Mantova, Eddie got a great start in the first race and was third during the opening lap but couldn’t keep the rhythm and cross the finish line in sixteenth; on Sunday he had a better rhythm but an early crash relegates him in thirty seventh position, and he came back twentieth. Quentin had also a good start in the first race, but he crashed during the first lap; back from thirty sixth to twenty fourth after four laps he had another crash and finish twentieth. Sunday was a better day for him, as he got an eighth position.

After a huge crash on a triple jump during a practice session, Amandine Verstappen never give up and even if her body was sore she wanted to enter both races. Twice she got a start in the top twenty, to score a seventh and a sixth position; fifth of the overall, she remains in contention for the final podium as she is only five points from the third position.
No race for the team next week; the next races ill be the French Elite for the boys in two weeks’ time at Castelnau, while Amandine will enter the French women series on May 8th at St Eloi. 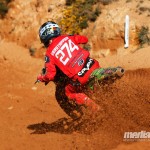 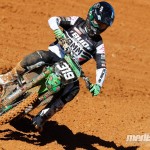 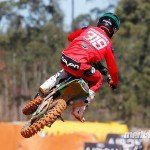 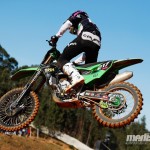 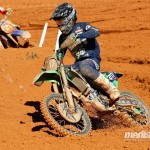