Lucas and Sacha Coenen once again hoisted the colours of the 9MM Energy Drink BUD Racing Kawasaki team on the highest steps of the podium at the French Junior Championship in Romagne, where Lucas won ahead of Sacha. More complicated day in the sands of Lommel for Amandine, Quentin and Hakon.

Change of leader in the French Juniors, and after this fourth round of the series in Brittany it is now Lucas who hold the red plate as leader of the Championship! In Romagne the twin brothers had no real opponents, each one posting the best time in their qualifying group before fighting for victory in both races. Sacha got the holeshot in both motos and was the first leader of the races, but twice he will be trapped when he comes back on the lappers, which will allow Lucas to take the lead in each race to get a double win. Lucas (1/1) climbs on the top step of the podium ahead of Sacha (2/2) and is now five points ahead of his brother before the Magescq round on August 28 and 29.

The sands of Lommel hosted the Women’s World Championship and the European 250. Tenth in qualifying practice, Amandine Verstappen will never manage to ride as she knows how to do on this surface; for a long time sixth in the first round before losing two places by arriving on the lappers – definitely! – she will be classified ninth in the second round and is seventh in the championship, fourteen points from the podium before the next double GP which will be organised at the beginning of September in Turkey. For Hakon Fredriksen, who got a podium here last year, the 2021 vintage will not be remembered; fifth fastest time in his group, our Norwegian had a big crash soon after the start of the first race; he will courageously try to restart in the second heat, but will give up after a few laps. Despite bad starts including a crash at the second one, Quentin Prugnières will never give up to do two good races coming back from the twenty-first to eleventh in the first moto, and then from thirty-eighth to eighteenth in the second one. Thirteenth of the day, he continues to learn for his first year in the 250 class at only 16 years old, he will race again this weekend as the European Championship 250 continues in Latvia.

Lucas: “I had a bit of trouble getting into practice, but then it went well and in qualifying I had a good result with the pole of my group. In the first moto I start in second and stay there until my brother has a problem with a lapper; I passed him on the outside and I won. My second start was not great, but I was quickly second behind Sacha, whom I overtook when he again had a problem with a lapper, happy with the day. ”

Sacha: “The track was really well prepared and in the qualifying session I was able to set good times with pole position. In the first moto I grabbed the holeshot and lead the race during fifteen minutes until a lapper blocks me, Lucas overtakes me at that time and I could not catch him. Second moto and another holeshot, and once again a lapper makes me fall! Lucas wins, I finished second twice and it’s still a good weekend. ”

Amandine: “I raced almost all of the first moto in sixth position, but a couple of laps before the end the marshal didn’t put out the blue flag and I lost two positions. The second moto was more difficult as I had used a lot of energy in the first one; physically it was tough today. Now we have several weeks before the next GP in Turkey; we went there two years ago and the track suits me.” 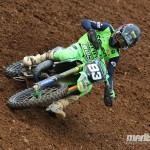 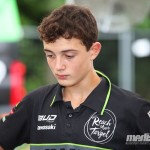 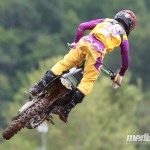 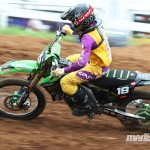 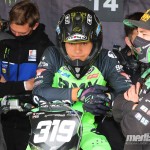 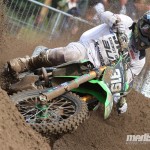 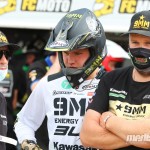 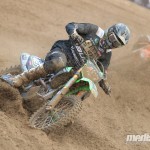 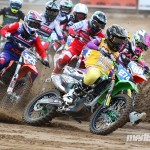 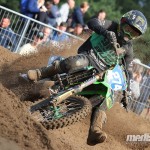