Back this year in the World Championship after several seasons in the European series, team Bud Racing Kawasaki and Mitchell Harrison continue to gain experience for 2020.

Involved in the last two rounds of the championship in Turkey last weekend and then in China, team Bud Racing Kawasaki discover new countries and experiences as this two events are treated like ‘oversea races’ which mean than the bikes are send from Europe in crafts while riders and staff fly to the events. The teams have limited parts and material for these races, compared to the European races where the racing truck is there with a lot of tools and parts, so everyone has to do with what they bring in their luggage!

The mechanics had a tough weekend as Mitchell’s bike had some troubles during this sunny weekend in Turkey.

Mitchell Harrison was affected by some technical issues, and was unable to enter the qualifying race on Saturday. Last behind the gate for the races he couldn’t get any good start but thanks to his pugnacity he came back thirteenth in the opening race and was twelfth in the second one when the bike had troubles and forced him to retire.

After a good qualifying race on Saturday, Brian Moreau was tenth behind the gate, and battled with his American teammate during the first moto. He scores a fifteenth place, and lost all his chances when he had an early crash in race two; back in eighteenth position he scores nine points before flying to Shanghai with the team for the last GP of the season.

Mitchell Harrison: “It wasn’t a good weekend for me with bike issues, which give me a bad gate pick for the races. In the first moto I came back thirteenth which was not so bad from where I started and I was riding in twelve in the next race when the bike stopped. I’m not where I want to be; it’s really hard to perform when you don’t have a good gate pick, the start is so important. I want to stay positive, all we are working now will pay next year, we are just progressing every weekend. It’s cool to discover new countries, just hope to end the season in China on a positive note.” 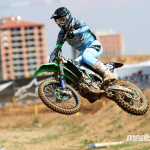 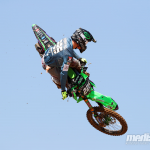 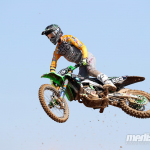