Hossegor is a familiar venue for Brian Moreau, as he is based with his team Bud Racing Monster Kawasaki in this city and this year again he won the round of the Beach Race series for his last race of the season.

Motocross, Supercross and beach races, Brian Moreau is an eclectic rider! After the MX season and two Supercross experiences, he was involved in the fourth round of the Beach race series aboard the same 250 KXF Bud racing. The Bud technicians just put a bigger tank to have a minimum of pit stops, and changed the transmission for this one hour and a half race. Brian took a good start on the beach, but during the first lap he crashed when he went on a soft sandy section losing a couple of seconds and some positions. Coming back second after a few laps he later joined the race leader and passed him before mid race. As his main rival run out of fuel the second part of the race was easier for Brian who controlled the pack to win the race thirty-seven seconds ahead of his closest opponent. It was the last race of the season for team Bud Racing, who will now prepare the MX2 World Championship as Brian Moreau and Brian Hsu will enter the first GP in Argentina on March 10th.

Brian Moreau: “It’s great to win here in Hossegor where the team is based, and also great to win this race for the second year in a row. At the beginning of the race the track was flat and fast, it wasn’t easy to make the difference but later it was rougher and better for me. During the first hour the weather was OK, but then we had a shower and I had to stop in the pits to take new goggles. I came here without any specific preparation, as I did a break after the season but now we won’t stop working and training to prepare next season.” 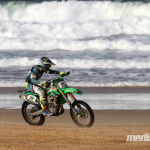 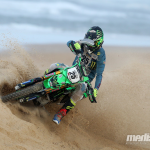 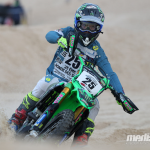 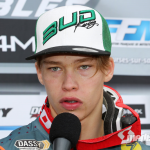 Mid-season recap, our riders Brian Moreau and Pierre Goupillon are feeling good, the boss is confident, let’s keep our pace and finish the season with a lot of victories !

The final round of the French Elite Championship was a great opportunity for Pierre Goupillon to confirm his good shape as he won his first Elite MX2 race. Team mate Brian Moreau offered a double podium to team Monster Bud Racing Kawasaki, with a third position.

Weather was pretty hot in Castelnau de Levis, but racing conditions were good and early in the morning Brian Moreau got another pole position – the 4th one this season after Bitche, Foolz and Iffendic – while Pierre Goupillon finished runner up in the timed practice session! Unfortunately injured during another race, Brian Hsu was missing this event.

Brian got the holeshot in the first race and was leading the series leader when he slides on one wet part of the track; Boisrame and Goupillon passed him, and when Pierre staled his bike in a corner Brian was back in second position. He finished the race only two seconds behind the race winner, followed in third by Pierre. It’s again a Bud Kawasaki who grabbed the holeshot in the second race, and this time it was Pierre who lead the pack; nobody will catch him, and Pierre won his first MX2 Elite race and also his first overall win! Brian crashed twice in this race but never give up and finished in sixth, fighting with Boisrame until the finish flag. Third of the race Brian ends the French MX season third of the championship for his first season in 250 class, while Pierre finished fifth after missing one round of the series in Bitche.

Pierre Goupillon: “It was a good day, just a shame that I staled the engine in a corner in the first heat as a double win was possible today! I’m happy as I did another good race in the second moto; I got the holeshot and then led the entire race, I show that I have the speed to win in the MX2 class. We worked a lot mentally with Yves (Demaria), and now I’m looking for some other podiums in the European championship.”

Brian Moreau: “A pretty good day with a good result in the practice sessions, but also some mistakes in the races. I got the first holeshot and was leading the race when I crashed, in some places it was easy to make mistakes and I couldn’t do anything when both wheels slides; then I came back second and posted the fastest lap. I did a wheelie at the second start and was in the top ten when I crashed in the first lap; I crashed one more time later, but was able to come back sixth and get another race podium.” 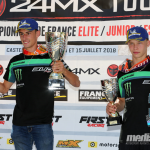 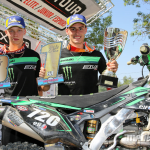 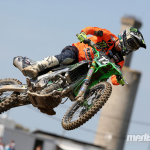 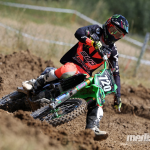 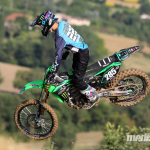 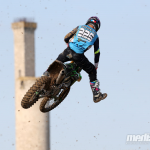 The French Elite championship was back in Britany this weekend, and team Monster Bud Racing Kawasaki had a successful weekend as Brian Moreau got his first moto win in Elite 250 class and with their three riders finishing in the top six of this penultimate round of the series.

Dry track, perfect weather, racing conditions were good in Iffendic and early in the morning the Bud Racing riders show their potential in the timed practice period with another pole position for Brian Moreau, a third for Pierre Goupillon and a fourth position for Brian Hsu! At the start of the first race Brian Moreau got the holeshot, followed by the series leader; before mid race Brian did a small mistake and lost the lead, and in the next circulation he found on his way a lapper and lost three more places. Fifth of this race Brian took his revenge in the next one; nearly missing the holeshot as he went wide in the first corner, he again battled with the series leader who finally did a mistake and offered the first position to Brian who won the race and secured a second overall. Racing nearly at home Pierre Goupillon just missed this podium for two points; with two starts around the tenth position Pierre had to find his way in the pack, coming back third and fourth to finish fourth overall. For his second race this season Brian Hsu show strong improvements compared to the first one; eighth in the first heat, he finished fifth in the second one, a great reward for the hard training work.

Next weekend the team will be in Castelnau de Levis (near Albi) for the final round of the championship; Brian Moreau and Pierre Goupillon are currently third and sixth in the standings.

Brian Moreau: “It was a great weekend for me! I got the pole position in the timed practice period and was leading the first race when I made a stupid mistake; then in the next lap a lapper was on my way and I lost time in a rut, losing some positions. Once more I got the best start in the second race, but went too wide in the first corner and Boisrame passed me; we passed each others several times, and finally he did a mistake. I got the leadership, and went to win my first ever MX2 race.”

Pierre Goupillon: “I had a good speed in the timed practice period, but was only tenth at the start of the first race and came back third with the fastest lap time. My second start will be similar, and I came back fourth; I have the speed and the physical condition, I must continue to work on my starts for the comings races.”

Brian Hsu: “I came here after a really good week of training, and I had good feeling. For the races I have to be happy and positive, even if it was a really tough one. I did my best, my arms are getting better and I need to work on some details and it will be OK. We’ll keep improving race by race and keep it real.” 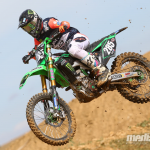 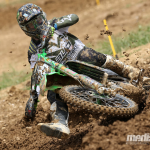 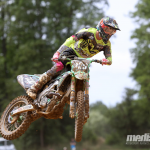 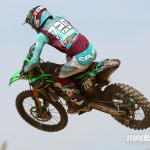 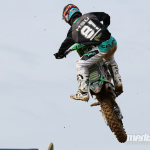 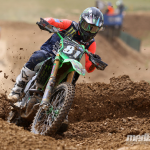 For the first time this season team Monster Bud Kawasaki lined up his full squad this weekend in Foolz, for the fifth round of the French Elite series. Pierre Goupillon enjoyed his second podium in a row in the series, while Brian Moreau lost a podium result due to a technical failure in the second moto. For his racing comeback, Brian Hsu got his first top ten of the season.

Faster rider in the qualifying session, two seconds faster than anyone, Brian Moreau had the first choice at the gate and did a good start in race one as he was fifth after the second corner; he came back third, but couldn’t challenge the two leaders who were already far away. His second start was perfect as he grabbed the holeshot and led the race during ten laps; but as always when the leader joins the lappers he lost time to pass several of them and lost two positions; third with two laps to go he unfortunately didn’t saw the finish flag due to a technical problem. He lost the overall podium, but Pierre Goupillon was not far and got it; second in the practice session Pierre crashed at the start of the first heat, and then did a great race coming back from nearly last to sixth. With a better start in race two he scored a fourth position, enough to be on the box. For Brian Hsu it was the first race since nine months, an eternity for a racer! Eighth in the practice session Brian was unlucky at the first start as he had no place to go when Pierre crashed in front of him; last to start, he came back seventeenth with no front brake as the disc was damaged in the crash. In the second heat he scored a top ten result, but suffered arm pumped after an average start.
Next race for our riders will be the penultimate round of the French Elite in Iffendic (Britany) in two weeks’ time.

Pierre Goupillon: “It was a pretty good weekend, with two bad starts; in the first heat I crashed at the start and was very far but I found good lines to come back sixth, with good lap times. I was only in the top ten at the second start, the track was very dry with one good line but I found some other lines to pass and came back fourth. It’s great to be again on the box!”

Brian Hsu: “I’m so happy to race again, it’s what I love to do. It’s been a very long time, I had some very tough time but I’m here today; I wasn’t nervous at all, I just try to do my best. The first race I had a pretty good start but someone crash in front of me and I had no place to go and crashed also; my front disk was damaged and I stop in the pits but the mechanics couldn’t do anything so I went back on track and came back from last to seventeenth without any front brake. My second start was not as good, I did some good laps and was happy to score a top ten result; I’m not tired at all, but I have to work on my arm pump and we need to find a solution for the next races.” 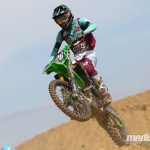 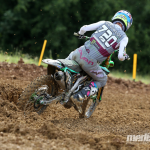 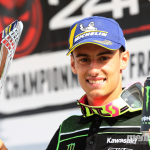 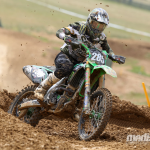 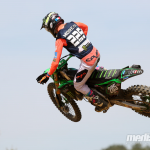 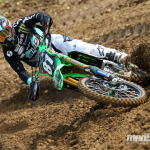 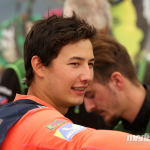