Last Sunday was held the famous festival of the off-road French bike in this September. Total success for the traditional Kenny Festival which relaunched the “Coupe des As” bringing together the best French riders of each category and displaying a quality line-up.

Faithful among the most faithful, the 9MM Bud Racing Kawasaki team was of course part of it and did not want to miss this event in the small town of Reygade ( close to Brive ) more than 2500 bikes, quad and SSV riders of which the recent 5th of the 250cc European championship Quentin 319 Prugnières who ignited the public with his maximum attack !

At the end of Saturday’s practice, the rider from Reunion island “scored ” a cautious 7th position on his KAWASAKI 450 KX ( first race with the big guys )… Sunday 11.15 PM, start of the first race under a radiant sun, a large audience and impatient to see the French elite on the track… He was not disappointed, Quentin will make the show in spite of himself going up from the back of the race and come to fail in the wheel of the first to a meritorious second place regaling the public of his incisive riding. 16H PM, second moto but this time Quentin signs a magnificent holeshot and takes with authority the lead of the race which he will keep for a few laps then will give up under the assaults of the GP pilot Stephen RUBINI. A second position that he will keep until the chequered flag managing with control his advance on the 3rd.

Mission accomplished for the young rider of the 9MM Bud Racing Kawasaki Team ( remember that he is only 17 years old ). A performance unanimously appreciated and greeted with enthusiasm by the sponsors and guests present and who honoured us with their visit: BS BATTERY / HEROCK / SOBEM SCAME / DISTRI CASH.

The final word for Quentin : “A positive weekend for an important race but with nothing at stake. I had to have fun without taking unnecessary risks. This was the case. I would like to take this opportunity to thank the organisation who did a great job on and off the track. A big thank also to my mechanics who once again did the job perfectly. Next event for me is the European Motocross of Nations next month. I’ll be back to training in the next few days on my usual 250 KX !” 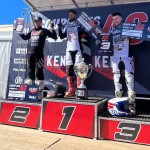 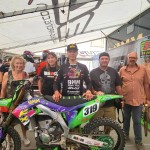 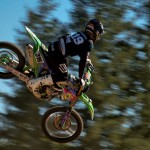 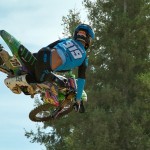 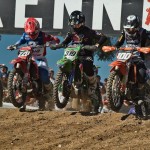 The French teenager had already impressed in the first moto on Saturday afternoon as he swept up the leaderboard from eleventh on lap one to finish third, and, to the delight of his home-country crowd, he earns his second overall podium of the series with another fantastic ride in Sunday morning’s race two. Closed down by his neighbours at the gate at the start he was way down in twenty-second position the first time past the timekeepers but rode an enthralling opening lap, making no less than a dozen passes to move into the top ten. Maintaining the momentum he was fourth within twelve minutes, even temporarily taking over third, to not only secure the overall podium but also jump from seventh to a final fifth in the series points standings. With eight top five finishes in the last fourteen races, three race podiums in the last three events contested and two podiums, Quentin confirmed all the expectations placed in him by Stephane Dasse and Thierry Van Den Bosch and he will now be able to take a break.

BUD teammate Eddie Wade crashed during practice and did not start.

Quentin Prugnières: “It’s a nice podium in front of the French fans, but I really had to work for it after a bad start. I wasn’t able to keep my rhythm after I reached third position, but the priority was to end the season with a good result which lifted me to fifth in the standings. The beginning of season did not go as planned, but I have proved that I am a podium contender in recent races. I want to thank all the people around me in the BUD team, my family and our mechanics and I am almost lost for words to describe my feeling after this podium in my home country. I really wanted to finish the season with a podium, and now we’ll take a break before getting back working to prepare for next season; the plan is to race the EMX250 again and also some GPs.“ 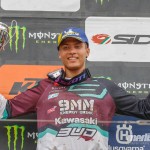 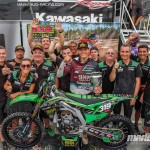 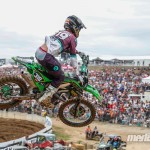 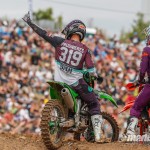 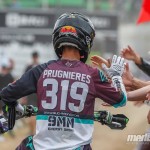 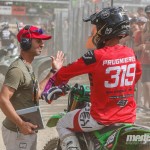 Quentin Prugnières and Eddie Wade both score a top seven result in one of the races in Finland, losing all their chance in a crash at the start of the other race. This weekend they will be at Saint Jean d’Angely for the final round of the 250 European Championship.

Finland didn’t meet any GP since 2014, so it’s a new track that Quentin and Eddy discovered at Hyvinkää where of course the layout was sandy. That was another tough one, especially as the sand on the starting line was really soft but on a hard ground, which caused several crashes at the start. On Saturday Eddie came out of the first corner in the top five, while Quentin crashed and started back behind the leading group a lap down. He did the whole race at their rhythm, while Eddie crossed the finish line in seventh position despite the pain following his crash one week earlier in Sweden. The roles would be reversed in the second heat, with Eddie crashing out at the start while Quentin moved into the top ten; both will make a good comeback, up to sixth place for Quentin – he lost a few places in a crash while attacking for third position – and eighteenth for Eddie who ranks tenth in the event, two places ahead of Quentin.

This weekend the team will nearly “race at home” as it’s in St Jean d’Angely that the championship will end.

Quentin Marc Prugnières: “Tough first race with this crash at the start, I got up with a hematoma in the thigh so I started lapped by the leaders. I did the entire race behind the leading group, which I followed throughout the race, without attacking them since I was a lap behind. Second start was pretty good, then I moved up to fourth but I had a rear brake problem and I lost the front on a corner entry with four laps to go. I finished sixth, frustrating because the speed was there and a race podium was possible. Now looking to Saint Jean next weekend, I love the atmosphere of the GP in France and as it’s the final I want to give everything to please the fans and the team.”

Eddie Wade: “It was hard to push with the ribs but I got a good start and the adrenalin helped me for the first few laps; it started to hurt after that and I got a little arm-pump holding on too tight to compensate but I came home seventh. The crash at the start of the second race didn’t helped me, but I never give up to come back scoring points even if my body was aching a lot again. “ 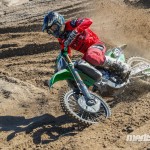 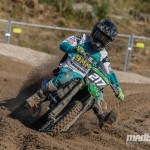 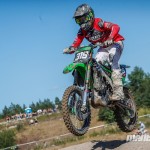 The teenager already laid the base for his eventual success with an impressive ride from a ninth-placed start to second at the finish of the first twenty-five-minute-plus-two-lap race on Saturday afternoon. He had advanced into the top four within six minutes and two more stunning passes saw him take over second by half-distance. The race-long leader, unhindered by traffic, was already thirteen seconds clear at that stage but the French youngster, setting the fastest lap of the race, had reduced the gap to less than six seconds by the time they received the chequered flag. Another ninth-placed start in race two on Sunday morning was rapidly converted to fifth on the opening lap. Emerging best from wheel-to-wheel tussles with each of the championship leaders, he took a firm grip on third in the closing stages to clinch second overall over the weekend and claim his maiden EMX250 trophy. With two rounds of the championship remaining he is now seventh in the series, just two points shy of fifth.

Teammate Eddie Jay Wade had a hefty crash during practice; Eddie broke one rib and had pain in his back and wasn’t able to race.

Quentin Marc Prugnières: “Today I finally got the podium which I just missed a few times this season and I think I deserved it! In both races I was able to manage the pressure from my rivals, and didn’t make any mistakes in either moto. I am happy with this podium; I have been waiting for this feeling of being on the box! Yesterday I took my first moto-podium in EMX250 and I did it again today. My second start could have been even better; my jump at the gate was OK but then I wheelie for a few metres. For sure if I could have avoided this I could have been looking for a moto win. I was a little stressed on the last lap, looking behind me to see how far it was to Elzinga, but I managed the gap until the end. The track here was very technical and that suited me. There’s no words to describe how I feel right now, but on Monday we’ll be back working on the track to get more; we still have two rounds, including the French one, and I can’t wait to race in front of the French fans. “ 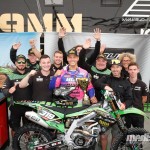 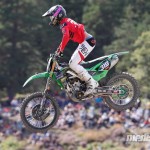 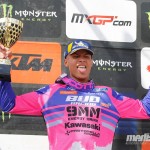 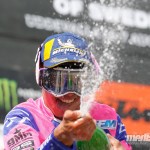 While Amandine Verstappen break records in France where she remains unbeatable, Quentin Prugnières, Eddie Wade and team 9MM Energy Drink BUD Racing Kawasaki move to Belgium for the seventh round of the European Championship.

Before moving to Lommel and its deep sand, where the EMX250 was back to action after a six weeks break, both Quentin and Eddie trained hard on the sandy track at the Bud Racing Training Camp. In the timed practice session, they show that this preparation was good as Quentin posted the fourth fastest lap time and Eddie the seventh best time of their group. On Saturday the track was still ‘decent’ for the first heat, and Quentin fight for the podium all race long; ninth after the opening lap he cross the finish line in fourth, just two seconds behind the leader of the series. Eddie had a tougher race, but he confirmed his improvements in the sand as he came back from twenty fifth to eleventh.

Sunday the track was rougher after so many training sessions and races, and both Quentin and Eddie got a good start as they were fifth and eighth after one lap. It doesn’t take a while for Quentin to come fourth, while Eddie crashed and regressed in nineteenth position. But he will be the best Bud representative in this race as he finishes eleventh despite another crash, while Quentin was forced to retire with a technical issue.

Coming as a neighbour to support her team mates, Amandine Verstappen didn’t miss this opportunity to watch the races. One week earlier she was racing the fourth round of the French Women series at Ouville in Normandy, and once more she won both races. It was her 37th and 38th consecutive moto win in the championship, a record that nobody will never beat for sure! The series will continue on September 18th, but before she will race the final round of the World Championship in Turkey on September 3rd and 4th.

Quentin and Eddie have a break next weekend, before moving to Sweden, Finland and France (Saint Jean d’Angely on August 20-21) for the final rounds of the EMX250. 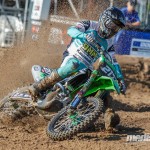 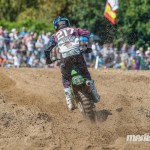 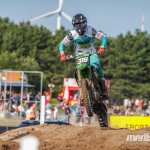 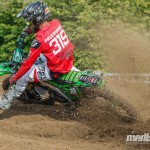 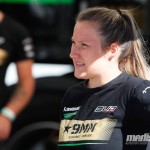