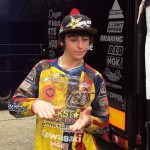 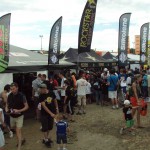 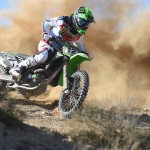 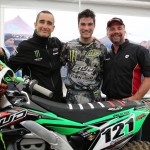 Winner of the MX1 French Elite series, Xavier Boog finish this season runner up in the main French Championship. Coming to the final round of Iffendic in third position, the Bud Racing Monster Energy Kawasaki rider finished runner up of the event behind Romain Febvre and runner up in the series behind Gregory Aranda.

With three ‘MXGP top guns’ racing this final round (Febvre, Paulin et Tixier), things were not easy for the three riders (Aranda, Teillet et Boog) fighting for the title. Coming to Iffendic in third position fifteen points behind series leader, Xavier Boog was still disturbed by a broken rib sustained one week earlier in a French SX tour event; sixth in the timed practice session, Xavier was followed by team mate Maxime Desprey who travelled all night after racing an International MX in Gimont on Saturday.

Xavier got a great start in the first heat, coming third behind Teillet and Febvre after one lap. Paulin, Tixier and Aranda passed him later, and Xavier who struggled with the track was only eighth at mid race; he finally earned three positions during the last laps, to finish fifth. The Alsacian rider was stronger in the second race, with a third position in the same lap as Febvre and Paulin who finished first and second of this last heat; as Teillet struggled during this event, Xavier earned one position to finish runner up in the series. For Maxime Desprey who entered two events in a row Iffendic was a tough event, with high temperatures in Brittany; fourth on Saturday night in Gimont with three strong races (2/6/5) among GP riders, Maxime did an impressive opening race in Iffendic with a fourth overall behind two GP riders (Febvre and Tixier) and the series leader. In the second heat he retired after two laps, tired after so many races in a row and a very short night.

Two weeks before the next race of the European MX2 Championship, Darian Sanayei was also racing in Gimont and as usual he improved his results race after race; fifth, fourth and second of the races, he finished runner up of this event with his 250 Kawasaki, among 450 riders.

Xavier Boog: “With my injury I can’t train at the moment during the week, but this weekend I didn’t suffer so much except at the end of the second race when I had some troubles to breathe normally. My feeling with the track was not really good in the first race, and I had a bad rhythm; it was much better in the second heat, and I scored a third behind Romain Febvre and Gautier Paulin who had a ‘GP rhythm’ in this race. I earned one rank in the series, now it’s Supercross time with another round of the SX Tour in La Bosse de Bretagne next weekend. The last round in Chateauneuf was not really good for me as I crashed during the practice sessions and broke one rib; I save some points with a ninth position, after a very bad start and another crash when I was fighting for the fifth position. I’m currently third of the series, only five points behind the leader so everything is still possible.”

Maxime Desprey: “It was a busy weekend for me with an International MX in Gimont and then the Elite Championship in Iffendic, but at the moment I need to do as many races as possible to be back at my best level! I finished fourth in Gimont, just a shame that I missed two good starts; then I drive all night long to join Iffendic, where I posted a seventh position in the practice session. I was happy with my riding in the first heat, coming back from eighth to fourth, but then I was unable to finish the second heat; I had a bad start, and felt tired so it was better to stop. But it was a good weekend for me; at each race I feel improvements, and have a better feeling; for example I had some arm pumped in Chateauneuf one week ago at the SX Tour, but this weekend I had no troubles.” 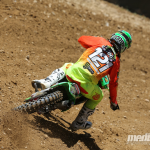 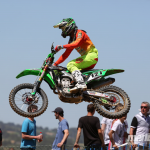 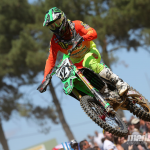 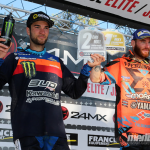 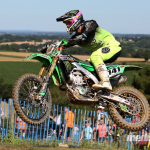 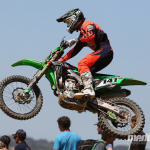 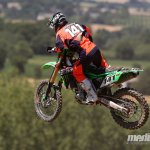 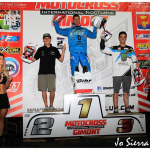